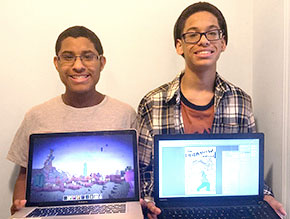 Dante won 1st place for his Minecraft version of the world in 100 million AD. Deaven won 2nd place for his hand-drawn, Photoshop enhanced comic book page featuring “Dev Cheetos” -his own comic book character. Dante now goes on to represent Tapestry at the state competition in March. Congrats to Dante and Deaven! We are so proud!

Tapestry’s Commitment to the Arts

Your email address will not be published. Required fields are marked *

Current families, please use the following link to submit your school lunch requests.

Virtual School Tour this Friday, January 7 from 9 AM -10 AM. RSVP required: https://bit.ly/TapestryRSVP

The home MS and HS basketball games tomorrow (Dec. 7) vs. Mills Springs Academy have been canceled. We will reschedule for a later date.

Enrollment for the 2022-2023 academic year is now open!
Complete an application at https://bit.ly/enrolltapestry

We appreciate the support of parents, friends, and Board for helping us move the needle closer to our $100,000 Annual Fund goal. At 50% participation so far, there's much more to do, together! Make a gift today! http://www.tinyurl.com/TapestryStudentAccount #autism #autismawareness #inclusiveeducation